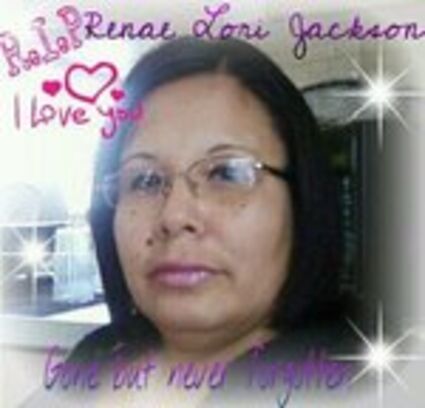 She attended schools in Minneapolis before her family moved up north to Onigum in 1983. Then she went on to Walker Elementary school. In high school she transferred to the Chief Bug-O-Nay-Ge-Shig where she graduated in 1991.

Renae loved to spend time with her children and family. She loved country music, going to the casino, visiting with all of her friends. She constantly had a smile on her face and was always laughing. Renae had a hug for you every time you seen her. Her passion was dancing at pow-wows as a jingle dress dancer. She made her own dress and also dresses for her nieces. She will be sadly missed by her children, her family, and her friends. She made friends where ever she went.

A wake service for Renae will begin at 5:00 p.m., Thursday, July 05, and will continue until the 1:00 p.m. service on Saturday, July 7, all at the Onigum Community Center, Onigum, MN. Spiritual leader will be Allen Hardy.

Interment will be in the Old Agency Catholic Cemetery at Old Agency, MN following the service.