December Weed of the Month: Pigweeds

Not all pigweeds are the same 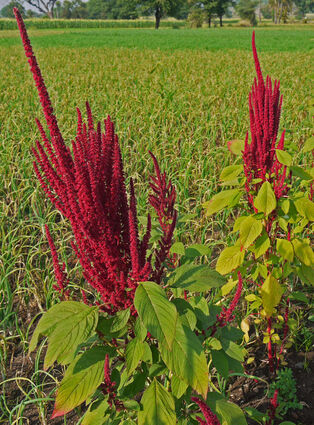 Ornamental amaranth is often grown in gardens to add color.

Pigweeds are a widespread genus of plants (Amaranthus) that are comprised of roughly 75 species across six continents. Pigweeds are herbaceous annuals or short-lived perennials that can produce hundreds of thousands of seeds. Some pigweed species are used for ornamental reasons or food, while others are considered noxious weeds.

Pigweeds, such as loves lies bleeding (Amaranthus caudatus), are grown as an ornamental in garden beds or along borders. They have a drooping flowering head that is typically a deep red or crimson purple color. There are many other varieties of pigweeds that are grown for their colors and are also used in bouquets and other arrangements. Other varieties like red garnet (A. hybridus) and hot biscuits (A. cruentus) can be used for their colors and the leaves can be eaten in a soup or cooked like collards. The seeds can also be used like a quinoa or ground up into flour and used for baking. Ancient Aztec people were known to cultivate amaranth for its grain.

There are many different pigweeds in the state, many of which are not detrimental to the environment. However, there is a concern that a few pigweed species are detrimental to row crops and can outcompete corn, soybean, sugar beets, and many other types of crops grown in Minnesota.

Palmer amaranth (A. palmeri) is a pigweed that is known as a noxious weed in many Midwestern states because it isn't native to our region and is very competitive with crops. This plant can grow 2 to 3 inches a day and commonly reaches heights of 6 to 8 feet.

This pigweed is known to develop resistance to multiple classes of herbicides and their different modes of action. If left unchecked, Palmer plants can overtake a corn or soybean field in as little as a year and greatly increase weed management and other production costs while decreasing yields. There are reports that Palmer amaranth has caused severe yield losses in the U.S., up to 91% in corn and 79% in soybeans.

If you suspect that you have Palmer amaranth on your land, you can find more information on the MDA webpage. There are resources to help you identify it and report it to us. We also have information that may help farmers manage their risks by understanding all the pathways that we have identified for its movement into Minnesota. A public map shows where Palmer amaranth has been found in the state. All these populations have been actively controlled to date. Farmers and landowners will lead our efforts to protect Minnesota's agricultural economy.

Similar to Palmer amaranth, waterhemp (A. tuberculatus) is an aggressive pigweed species that has become very problematic in Minnesota because it can become herbicide resistant and overtake crop fields in a short period of time. There are many biotypes of waterhemp, which also makes it difficult to control. Because waterhemp has spread throughout most of Minnesota's row crop production region, the MDA has not focused management efforts on this species. If you have questions or concerns about waterhemp, or would like to receive information on management options, contact your local University of Minnesota Crop Educator who can direct you to more specific resources.