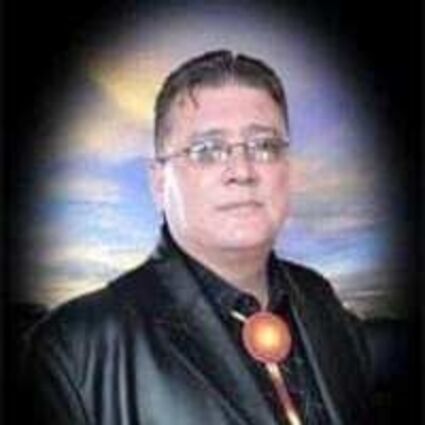 Marlin was the oldest child of Ida Marie Goodwin and Ronald Joseph Farley born on May 9, 1961, at Abbott Northwestern Hospital in Minneapolis, MN, and was an enrolled member of White Earth Tribe. Throughout his childhood, he was especially close to his maternal grandmother, Ida Goodwin and had much appreciation for his foster parents David and Nancy Chrisman.

He graduated from Waubun High School and went on to graduate from Bemidji State University with a degree in Social Work.

Marlin's spiritual life was very important to him. He studied under medicine man, Adam Lussier, as a young man and went on to become a pipe carrier, Sundancer, ceremonial helper & healer, and traditional bustle dancer.

Marlin was 21 years sober and spent the bulk of his life giving back to his community by being a sponsor and facilitating meetings.

Marlin had a rich professional life, always as a helper. In his younger years, he worked for the Division of Indian Works Family Violence Program. He went on to work as director of the White Earth Adolescent Group Home and worked with youth for many years. In 2003, Marlin was introduced to the Wellbriety Movement and then in 2004, began working for White Bison, initially as a trainer and becoming a master trainer, and eventually becoming a board member. He traveled nationally and internationally across the United States and Canada training and helping people recover and heal from addictions and unresolved grief & trauma.

His passion for his work derived from his own life experiences with substance abuse, and past traumas but overall, a strong and unwavering desire to help others. This extended far past his own community, making connections and promoting positive change everywhere he went.

He was a part of the Sacred Hoop Journey For Forgiveness in 2009 and from that experience was instrumental in creating the Mending Broken Hearts Curriculum. He was a lifelong supporter of the Wellbriety Movement. Marlin was also the Founder and President of Black Stone Consulting and a renowned public speaker.

He created Painted Sky Productions and produced short films/documentaries like "AA in Indian Country" and "Culture Is Prevention".

Most recently he worked For Sanford Health in Bemidji, MN, as a traditional healer for their mental health services.

Marlin will be forever associated with the Wild Rice Roundups and Red Road Warrior Gathering which he started and coordinated.

In his spare time, Marlin loved riding his motorcycles and Spyder. He was a diehard Vikings fan, an avid hunter and fisherman, and he loved being Papa to his grandbabies. He was also well known for his dry humor, whether you were ready for it or not. He will be dearly missed by many.

Marlin was preceded in death by his parents Ida M. Goodwin & Ronald J. Farley, and his little sister, Julie Farley.