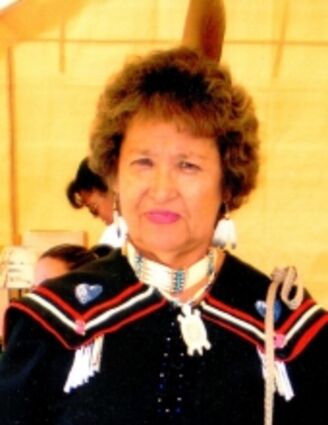 Priscilla E. "Cookie" Robinson, "Jikii Anung Ikwe" (Fancy Star Woman), 69 of Cloquet passed away on Friday, June 17, 2016 in St. Luke's Hospital in Duluth. She was born February 1, 1947 in Cass Lake, the daughter of Manuel and Elaine (Pellerin) St. John. She was raised in Cloquet and after she married Dennis Robinson they made their home in Cloquet and raised their four children. Cookie worked for the State Hospital in Moose Lake for several year before retiring. She also worked as an ARMS worker for FDL Human Services.

Cookie was a member of the White Earth Reservation. She enjoyed going to the Pow Wow, camping, admiring her yard and flowers, beading, and looking at her IPAD. What she enjoyed the most was the time she spent with her grandchildren.

Cookie was preceded in death by her parents; grandparents, Alice and Eddie Jackson and Edward and Celia Pellerin; and an uncle, Roman St. John.

Memorial Service: 2:00 p.m. Sunday, June 19, 2016 in the Atkins Northland Funeral Home, 801 14th St., Cloquet. A time of lunch and fellowship will follow in the Fireside Room of the funeral home. To sign the guest book and offer an online tribute, see http://www.atkinsnorthlandfuneralhome.com