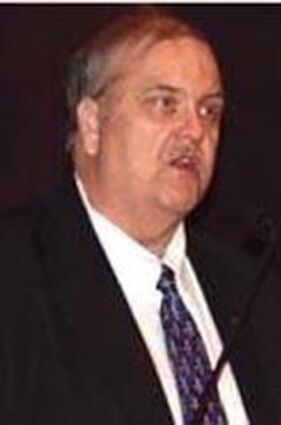 His memorial service will be at 1 p.m. Monday, July 30, 2012, at First Lutheran Church in Bemidji with the Revs. Lee Yarger and Linnea Papke-Larson officiating. Interment will be in Greenwood Cemetery in Bemidji under the direction of the Cease Family Funeral Home of Bemidji.

His first job after graduation was with the Forest City Summit in northern Iowa. He later moved back to Duluth and worked for the 1980 Census before being hired at the Pioneer as a reporter in May 1980. He was later named managing editor. Most recently, he was the Pioneer's political editor and Opinion page editor, and covered the Beltrami County Board of Commissioners. Brad covered politicians from the local and county level through governors. Some politicians have said they've sometimes gone to Brad to get information on an issue. He also moderated political forums where he asked tough questions

Brad loved his work with the Pioneer, but he retired in August 2011 because of health issues and moved to Northview Manor. He continued to write a weekly column and occasional articles for the Pioneer.

Brad was a member of First Lutheran Church. He was a longtime member of the Sunrise Rotary Club, which was a very important part of his life. He also was a member of the Sons of Norway and the Ruffed Grouse Society. He enjoyed a good steak and a good cigar and was often seen motoring around the west side of town in his electric wheelchair. A big hockey fan, Brad would go to Bemidji State University-UMD men’s hockey games wearing a BSU jersey and a UMD cap to show his twin loyalties. He enjoyed visits to Itasca State Park, and he liked freighters. He collected Star Trek memorabilia, hockey pucks, caps, pen-and-pencil sets and movies. His extensive bobblehead collection, which included politicians, sports figures and more, was well-known to frequent visitors to the Pioneer.

Writing was a passion, and he liked photography as well. Brad was a season ticket holder with the Bemidji Symphony Orchestra. He loved to read, especially about politics, politicians and government, and had a vast selection of books, some of which he never got a chance to read. He had a hunger for knowledge and understanding, and always wanted to know more. He liked spending time with people; his relationships meant the world to him.

He is survived by an uncle, Lawrence (Susan) Jensen of Minneapolis; an aunt, Florence Mapes Mohn of Farmington, Minn.; several cousins; and many dear friends. He was preceded in death by his parents.