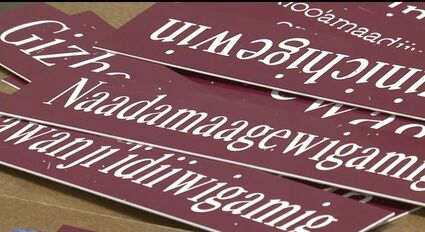 Tourists visiting Bemidji this summer may pick up a few words of a “foreign” language.

That’s because the first city on the Mississippi River way north in Minnesota may be the only town off a reservation trying to incorporate the area’s indigenous Ojibwe language into daily life.

All over town Ojibwe language signs are posted right alongside English language labels, and for a just cause. The signage is part of a broader effort to preserve the language spoken by an estimated 60,000 persons across areas of the northern United States and into Canada as well as to bridge cultural divides between whites and American Indians.

Words such as “boozhoo,’’ an Ojibwe word for “welcome” and many other Native American terms crop up around town, in an appliance store, the local hospital, the convention center, a local coffee shop, and this spring in the public schools.

It’s a symbol of respect and you can do it for practically nothing, but “it speaks volumes,’’ says Bemidji resident Michael Meuers, who with Rachelle Houle kick-started Bemidji’s Ojibwe Language Project, an off shoot of Shared Vision, a Bemidji group working for friendlier relations between American Indians and the majority culture.

“There is a pride when Indian people come into downtown and they see their language on these doors,’’ says Meuers.

“It’s a welcoming invite when I go into a business in Bemidji and see that sign on the door,’’ agrees Lorna LaGue, who lives on the White Earth reservation 70 miles away, works for the Indian Health Service and sits on a state board working to revitalize Dakota and Ojibwe languages in the state.

Started a few years ago, the project now involves more than 150 establishments.

Recently, the last of about 200 burgundy and white Ojibwe language signs produced in Bemidji High School machine-tool classes went up in public schools throughout the district where American Indian enrollment is 18.5 percent. Bemidji lies in the midst of White Earth, Red Lake and Leech Lake Indian reservations.

Now, in schools there are Ojibwe as well as English language signs. The health office is also “aakoziiwigamigoons.”A cafeteria sign says “wisiniiwagmig.’’

High school principal Brian Stefanich says the effort shows that school is a safe and welcoming place for all cultures.

“I think it will benefit all of our students. We want to recognize all cultures and our Native American students are a big part of our high school,’’ Stefanich told the Associated Press. Ojibwe language classes and American Indian history classes are offered at the school where a student news video program introduces a new Ojibwe word each week, he says.

But as for tourists, “It’s intriguing to them,’’ she says. They often ask if they can take with them the small table tent cards featuring Ojibwe words and the pictures of animals, birds and insects that she places around her shop.

(A tourist favorite features the words “zagime,’’ meaning “mosquito,” or “zagimekaa’’ meaning “many mosquitoes,’’ she says.)

But attracting business wasn’t why Aylesworth joined the effort.

“I just think it is respect, being respectful of the language and the people,’’ she says, explaining she supports the revitalization of the language and culture of American Indians who lived in the Bemidji area long before European immigrants arrived.

For Meuers, 67, the bilingual effort is a vision realized.

A transplant himself, from suburban Robbinsdale, and of German, Irish and French descent, Meuers says he first became interested in indigenous cultures while being stationed by the military in Hawaii.

Native “Hawaiian words and culture are very much a part of everyday life” in Hawaii, he says.

Why, Meuers wondered, years after leaving Hawaii and doing public relations and lobbying at the state Capitol for the Red Lake reservation, couldn’t Ojibwe enter the language mainstream here as well?

Participants also credit Ojibwe language scholars John D. Nichols at the University of Minnesota and Anton Treuer, at Bemidji State University and author of many books exploring Indian culture, language and history, for their assistance.

Ojibwe words, adds Meuers, bring great beauty and meaning to American culture. Consider, for instance, that the word for a elder, “gichi-aya’aa,” means “great being.” The word for female elder, “mindimooye,” means “one who holds things together.”

To view this article translated into Ojibwe, http://www.minnpost.com/community-sketchbook/2012/05/ojibwemowin-ozhibii%E2%80%99igaade-miinawaa-aabadad-miziwe-go-eni-bimaadiziwaad The article was translated by Anton Treuer, professor of Ojibwe at Bemidji State University and author of many books on Indian culture, language and history, including "Everything You Wanted to Know About Indians But Were Afraid to Ask."