Walz tucks tax, fee increases among checks and credits in his proposed budget 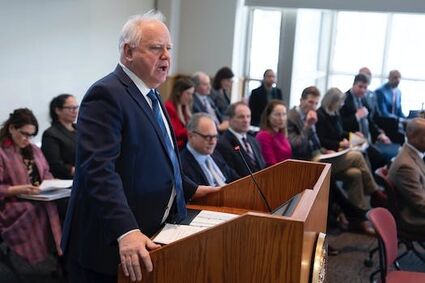 With his entire cabinet in the background, Gov. Tim Walz unveiled his budget for the next two years on Tuesday.

Gov. Tim Walz trumpeted the "largest tax cuts in state history" in his two-year budget, yet tucked amid the expansive benefits for families and seniors there are also higher fees and new taxes.

In his public presentation Tuesday at the Department of Revenue with all his commissioners by his side, Walz highlighted his proposal for rebate checks, Social Security tax trims and expanded credits for families raising children and facing child-care costs. He said his $8 billion in tax cuts would relieve pressures on Minnesotans' budgets.

"If you do have children in school, if you do have day care, if you are a worker and making less than $150,000, you're going to see direct impacts," Walz said Wednesday during a bill signing ceremony.