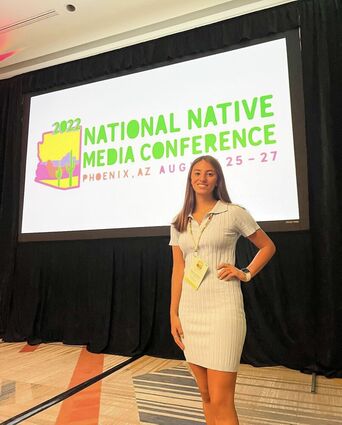 Carrie Johnson is a junior at Austin College in Sherman, Texas, working on a double major for degrees in English and media studies, exploring the world of journalism and broadcasting. In addition to her studies, Johnson has a well-rounded schedule of internships, freelance writing and softball.

She is currently interning for the institutional marketing and communications department at her school. She is a fellow for the Posey Leadership Institute, as well as a staff writer for the Austin College Observer. Outside of being a journalist, she is an accomplished athlete, playing softball at Austin College. As a former basketball player, she broke the national 3-point shot record for all high schools.

"I have been very involved in sports my whole life. My parents were my coaches," she said.

Her love for sports and journalism mesh in her writing freelance sports game stories for the Sherman Herald Democrat, her hometown newspaper.

Even with a full plate, Johnson still found time to participate in a 10-week internship with the Chickasaw Press in 2022.

"Working with the Chickasaw Press has been great," Johnson said. "I found out about the internship from Chokma Chickasaw Magazine, which I'm now involved with content creation for. It's great knowing that even though I grew up disconnected from the tribe, reconnecting is okay. There is nothing against me for not having known everything about the Chickasaw Nation coming in. It is such a supportive environment."

Johnson has found a hunger for creating awareness of First American culture. This passion was ignited before her Chickasaw Press internship, at the National Native Media Conference in Phoenix, Arizona. She had a summer-long fellowship with the Native American Journalists Association (NAJA), and at the end of it, they fully funded her to attend the four-day conference.

NAJA is a network of different Indigenous outlets and journalists that conduct an annual conference to recognize accomplishments and present awards for stories written in different categories.

Other outlets are invited to the conference to learn about First American journalism. They attend panels about diversity, equity and inclusion, as well as learn about programs, resources and jobs available to students and professionals. These panels are open to anyone in mainstream or tribal media.

The first day of NAJA's conference in 2022 was designed for the fellows to meet and greet, as well as tour places in Phoenix, like the Walter Cronkite School of Journalism and the Arizona Republic. The fellows got a sense of how important young First American journalists are to the profession, and how hungry First American and non-First American outlets are for such journalists to tell their stories, build connections and create awareness about truthful representation of First American cultures.

"This was awe-inspiring, and I found what I truly want to do in life. This is what led me to applying for an internship with the Chickasaw Press. I actually found out that I was accepted while at the conference. Me and my peers were ecstatic about that," she chuckled. "This conference is also a big door opener. I met so many important people. I had someone from MLB (Major League Baseball) come up to me and offer an internship. The Washington Post approached me as well. Many outlets attended that want young journalists to come bring their insight and develop their expertise while sharing aspects of their culture."

Johnson said she is Chickasaw from her dad's side and Pawnee from her mom's side.

"I grew up knowing I was Chickasaw," she said. "I was so inspired to see how many Natives there were that knew they are Native, that were learning about their culture and being reconnected. These are the kind of stories that I am interested in. I want to show how connected we are to our cultures, but also how we can grow to be more connected and how inclusive we can be with who we are to the rest of the world."

Johnson said her parents and sister are her greatest motivator, as their excitement for her career path pushes her endeavors.

"I am so grateful to all the people from NAJA, as well as the other fellows, for the experience I enjoyed in Arizona. The staff and the mentors were fantastic. I had never met another Native my age who was not my family, so going to this conference and being fully surrounded by Indigenous journalists was empowering."