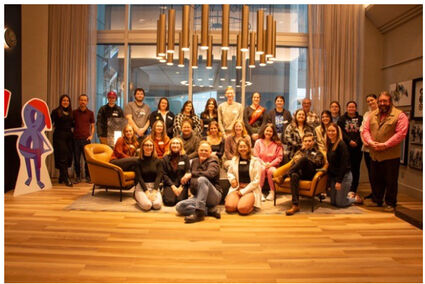 Pictured are attendees from this weekend's Self-Government Simulation

From Friday, January 20 to Sunday, January 22, youth gathered at Toronto's Sheraton Gateway Hotel to develop foundational skills and key learnings on the many facets of Métis self-government. Participants networked with other emerging leaders and learned from advisors about the MNO's self-government efforts and practical skills related to MNO assemblies.

"As the Government representing Métis in Ontario, we place great importance on engaging with our youth," said Chair Hank Rowlinson. "This ensures they have the tools to move forward confidently and guide generations to come."

After a series of learning exercises, participants wrote their own resolutions and brought them forward in a mock-assembly. Youth were given the floor to share their key learnings and express their priorities for the MNO moving forward.

"It was incredible to see our talented young people in action this weekend," said MNOYC President and PCMNO Youth Representative, Jordyn Playne. "Connecting MNO leadership with the next generation is imperative in providing support for Métis people, both present and future."

In 1993, the Métis Nation of Ontario (MNO) was established through the will of Métis people and their communities coming together throughout Ontario to create a Métis-specific, democratic, province-wide governance structure. The MNO represents and advocates on behalf of its citizens who are rights-bearing members of Métis communities that collectively hold rights, interests, and outstanding claims protected by sections 25 and 35 of the Constitution Act, 1982, including, but not limited to, the right of self-government. Ontario is home to the 2003 Powley decision, in which the Supreme Court of Canada recognized the existence of the Métis right to harvest for food that is protected by Section 35 of the Canadian Constitution. Powley was-and remains-the only Supreme Court of Canada ("SCC") decision affirming Métis rights protected by section 35 of the Constitution Act, 1982.

About The Gordon Foundation

The Gordon Foundation is a charitable organization. The Foundation's initiatives include Understanding Our Treaties, which provides experiential learning about treaties in collaboration with partners.