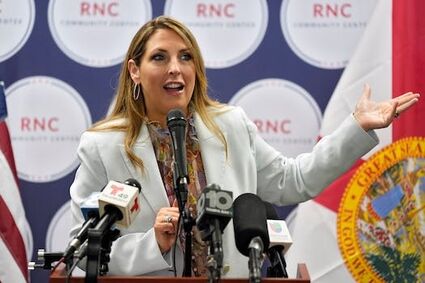 Republican National Committee chairman Ronna McDaniel speaks during a Get Out To Vote rally on Oct. 18, 2022, in Tampa, Fla.

NEW YORK - By week's end, the Republican National Committee is set to resolve a bitter leadership feud that has exposed perilous divisions within a party that has struggled to move past a disappointing midterm ahead of a critical race for the White House.

Those inside the fight believe the days ahead of Friday's secret ballot at a luxury seaside resort could get even uglier as rebel forces within former President Donald Trump's "Make America Great Again" movement threaten to upend RNC Chair Ronna McDaniel's reelection bid.

The attacks have been led by McDaniel's chief rival, Harmeet Dhillon, a Trump attorney who has accused the incumbent of religious bigotry, chronic misspending and privately claiming she can control the former president - allegations McDaniel denies. Also in the race is My Pillow CEO Mike Lindell, a pro-Trump conspiracy theorist who secured enough support to qualify for the ballot.