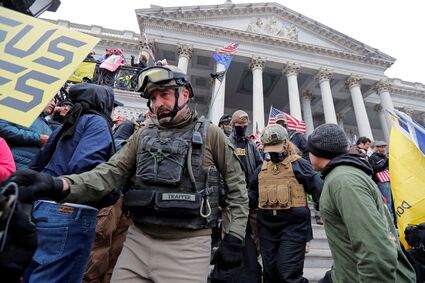 Members of the Oath Keepers are seen among supporters of U.S. President Donald Trump at the U.S. Capitol during a protest against the certification of the 2020 U.S. presidential election results by the U.S. Congress, in Washington, U.S., January 6, 2021. REUTERS/Jim Bourg/File Photo

WASHINGTON, Jan 23 (Reuters) - Four more members of the far-right Oath Keepers were found guilty on Monday of seditious conspiracy for taking part in the Jan. 6, 2021 assault on the U.S. Capitol by supporters of Donald Trump, in another big win for federal prosecutors.

The verdict marks the end of the second major sedition trial against members of the extremist group, who were among the hundreds who attacked the Capitol in an unsuccessful attempt to prevent Congress from certifying Democrat Joe Biden's victory over Trump, a Republican, in the 2020 presidential election.