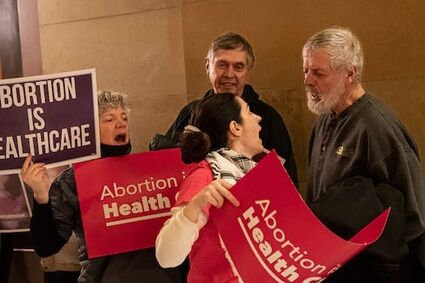 Supporters and opponents of abortion rights faced off Thursday at the Capitol in St. Paul. With Democrats in control of the Legislature, the House on Thursday voted 69-65 to enshrine abortion access in state law.

U.S. Health and Human Services Secretary Xavier Becerra traveled to Minnesota on Thursday to listen to the struggles of health care providers facing a surge in demand for abortion services and to encourage Democratic leaders to continue to protect access.

His visit came just ahead of the 50th anniversary of the landmark Roe v. Wade decision legalizing abortion - which was struck down last year - and on the same day legislators in the Minnesota House voted 69-65 in favor of a bill to codify access to abortion in state law.

"You're going to make history at a time when regression seems to be on the table more than anything else," Becerra said at a Capitol news conference with Gov. Tim Walz and top DFL legislative leaders. "You're setting history in the right direction. ... We are your partners in the fight."