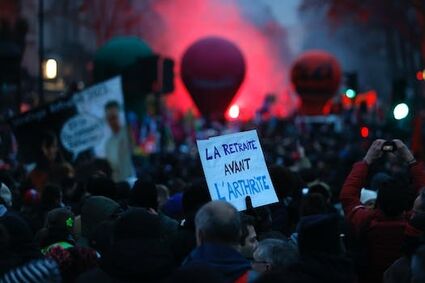 Protestors march during a demonstration against pension changes, Thursday, Jan. 19, 2023 in Paris.

PARIS - At least 1.1 million people protested on the streets of Paris and other French cities Thursday amid nationwide strikes against plans to raise the retirement age - but President Emmanuel Macron insisted he would press ahead with the proposed pension reforms.

Emboldened by the mass show of resistance, French unions announced new strikes and protests Jan. 31, vowing to try to get the government to back down on plans to push up the standard retirement age from 62 to 64. Macron says the measure - a central pillar of his second term - is needed to keep the pension system financially viable, but unions say it threatens hard-fought worker rights.

Out of the country for a French-Spanish summit in Barcelona, Macron acknowledged the public discontent but said that "we must do that reform" to "save" French pensions.