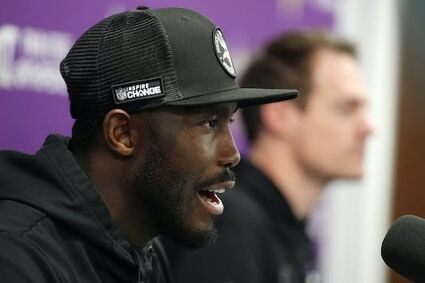 Vikings General Manager Kwesi Adofo-Mensah and coach Kevin O'Connell spoke to the media during an end of the season news conference Wednesday.

Three days after a home playoff loss ended the Vikings' 13-win season, General Manager Kwesi Adofo-Mensah reached back into his Wall Street past for context about a unique run that met an abrupt end.

"I'm a little out of it, so I couldn't tell you where the S&P500 is, but I would say obviously you have startups and you have your longer-tenured core [stocks] that have earned money for a long time. I think we're somewhere in between," Adofo-Mensah said. "A startup in the sense that we are in transition: we brought in a new culture, we brought in a new way of playing, but I think this year we established our ability to earn. In our business, earnings are wins.

"We've shown that we have a culture and ability to do those things at a really high level, but I wouldn't say that we're the established 'there' team. ... We want to be. That's why I'd say we're in between those two stages right now and we are trying to be that mature team that goes every year to the playoffs and has a championship standard."