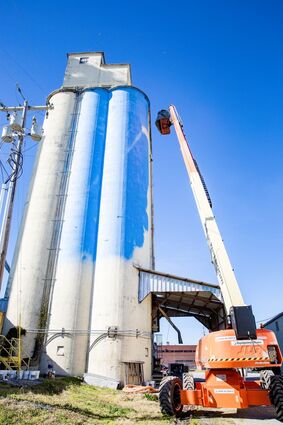 Professional artist and seasoned muralist, Dr. Bob Palmer (PhD in Education), followed the sun as he painted around each side of Bluebonnet Feeds' (Bluebonnet) 127-foot silo in Ardmore, Oklahoma.

"We paint on whatever side is the sunniest to stay warm," said Palmer, wrapped in a winter coat and hat on a cold and windy day. "It doesn't bother me anymore. I've done over 4,500 murals, a few tall grain elevators like this one. I've worked on a freezing New Year's Day and in brutal August heat. Doing this for over 40 years, I'm not afraid of heights, I respect them."

From halfway across town, the top of the feed silo can be seen touching the sky, with a bright blue paint glistening in the sun.

"This blue is a base coat that I often use for my murals," Palmer said. "It works as a primer. It's from Anchor Paint in Tulsa. Everything we paint will go on top of this. At certain times of the day, it will blend in with the color of the sky, too."

Palmer began working on the 72-foot wide by 127-foot high mural at the end of November. One of Palmer Studio's assistants, Lee Robins, braved the cold every day to make sure Palmer had everything he needed to be safe and efficient with his painting time. Chickasaw Nation Director of Fine Arts Brent Greenwood brought his arts academy students to observe and learn from Palmer's techniques.

The main subject of the mural is the brave Chickasaw Warrior.

"Bluebonnet makes horse feed," said Palmer. "So, we are also painting two Chickasaw horses. We will have some designs in the background, like clouds and wind patterns."

Being next to the railroad tracks allows Amtrak passengers and railroad employees a great view of the artwork.

"The Chickasaw Nation saw the silo and realized it was a big canvas opportunity in the public eye. People will see it driving by or across the street at the train station. The elevator is a great spot to feature Chickasaw heritage," said Dana Kielar, a Bluebonnet employee who photo documented the mural painting process.

"Inside are raw ingredients, and those get carried from the elevator to the mill next door where we make the feed, and the store sells all the products that we make here. So, wherever you buy Bluebonnet, whether it's in Montana or Oregon, it came from here," she said.

The feed is sold in the local Bluebonnet Feeds store and distributed across the United States.

A painting project so grand involves many moving parts. The mural was made possible due to the collaboration of the Chickasaw Nation, the Ardmore Beautification Council (ABC), the Westheimer Family Foundation, Bluebonnet Feeds and Anchor Paint.

Bluebonnet Feeds management took great pains to power wash years of accumulated dirt and grime from the building's surface before painting could begin. The Chickasaw Nation and the Westheimer Foundation supplied funds for the mural. Anchor Paint donated Palmer's mural paint of choice. The ABC coordinated the project and provided lodging for Palmer and Robins while they were in Ardmore.

ABC was founded in 1989 to educate citizens about sustainable beautification efforts with programs to end litter and encourage recycling. The organizations motto is "A Beautiful City is Good Business."

Kay Watson, the ABC board member coordinating the mural projects, said the mural is the 10th such project Palmer and the Palmer Studio team have accomplished in Ardmore.

"This is, by far, the most challenging effort and will be something both Ardmore and the Chickasaw Nation will be proud to show to the world," she said.

"Our teams, with the applied artistic talent of Palmer, have worked well together to accomplish beautiful Chickasaw art that demonstrates the culture and history of this area of southern Oklahoma and the Chickasaw Nation. One such project was completed on a private commercial building at a busy intersection in northwest Ardmore in 2020," Ms. Watson said.

Palmer has also painted murals about the early history of Ardmore on a building near Central Park. Located on the side of a six-story downtown building is a mural depicting the history of World War II and how it involved the Ardmore military base. He painted the Ardmore Tigers mural at the Ardmore High School multisport stadium, a beautiful mural inside the historical museum and much more.

Palmer has murals across Oklahoma, as well as Kansas and as far away as Canada. Much of Palmer's work can be viewed on his website, MuralsByPalmer.com.

"I am thankful for the opportunity on many levels. It tells me that people appreciate my work. They must enjoy looking at it. This one is not something that will fly under the radar. It is a high-profile project," Palmer said. "I'm thankful for the sponsors who believe in Palmer Studios to be able to do this. I'm grateful to have so many people on board to help. It's truly a team effort."