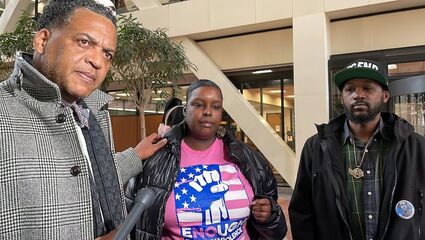 On the first day of jury selection in the murder trial of a man accused of fatally shooting North High star quarterback Deshaun Hill Jr., his family's attorney said they are asking officials to investigate criminal charges against the school's principal who accompanied some students on a walkout on the day Hill was killed.

The slain sophomore's parents were in Hennepin County District Court Tuesday morning for the second-degree murder trial of Cody Fohrenkam, 30, who is accused of shooting Hill on Feb. 9 during a chance encounter as the two brushed past each other on the sidewalk as Hill walked to a bus stop. Relatives and supporters wore buttons and T-shirts for a new memorial foundation in honor of their son, known as "D-Hill."

Hill's parents, Tuesday Sheppard and Deshaun Hill Sr., last week were paid a $500,000 settlement from the Minneapolis Public Schools in their son's death. The district said in a statement after the settlement that it denied all liability, but the family's attorney, William Walker, accuses North High Principal Mauri Friestleben of being liable for Hill's death because she joined students in a walkout that day to protest the Minneapolis police killing of Amir Locke.