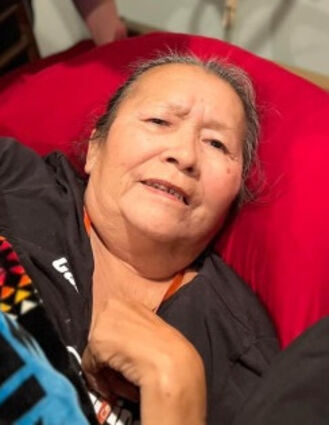 Carol Ann (White) Schoenborn “Ishpimiiwikwe” (Heavenly Woman) Bear Clan 64, passed away January 11, 2023, at her home in Bemidji, Minnesota. She was born on August 25, 1958, to George and Mary White. Carol was a homemaker all her life. She raised her four children: Roselin, Randy (Shantel), Clint (Jami) and her baby David White. She later met the love of her life Truman Schoenborn, they were married and made their home at the cut off. Carol was Miss Indian Minnesota in her teenage years. She loved going to Powwows. She liked cruising and visiting her friends. She enjoyed going to the casino and she most of all enjoyed spending time with her family. Those welcoming her in the spirit world are her husband, Truman; her parents George and Mary White; brothers George White, Roger White; sister Diane White; great nephew Craig Graves.

A Wake for Carol will begin on Monday, January 16, 2023, at 12:00 PM and continue until the traditional funeral service on Wednesday, January 18, 2023, at 10:00 AM and the Boys and Girls Club, Ponemah, Minnesota. Spiritual leader will be Allen Hardy. Burial will be in the White Family Burial grounds. Arrangements are by Whispering Pines Funeral & Cremation Service, Walker, Minnesota.