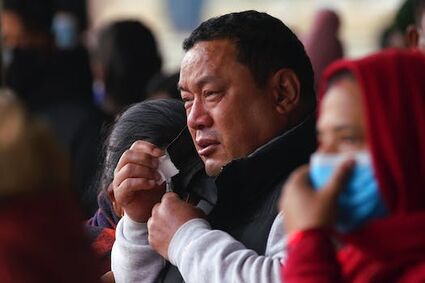 A man cries as he waits to receive the body of a victim of a plane crash, at a hospital in Pokhara, Nepal, Monday, Jan 16, 2023.

POKHARA, Nepal - Search teams retrieved the flight data and cockpit voice recorders Monday of a passenger plane that plummeted into a gorge on approach to a new airport in the foothills of the Himalayas, officials said, as investigators looked for the cause of Nepal's deadliest plane crash in 30 years.

At least 69 of the 72 people aboard were killed, and officials believe the three missing are also dead. Rescuers combed through the debris, scattered down a 300-meter-deep (984-foot-deep) gorge, for them.

Many of the passengers on Sunday's flight were returning home to Pokhara, though the city is also popular with tourists since it's the gateway to the Annapurna Circuit hiking trail. On Monday evening, relatives and friends were still gathered outside a local hospital, some shouting at officials to speed up the post mortems so they could hold funerals for their loved ones. Later, some did receive the bodies of relatives.