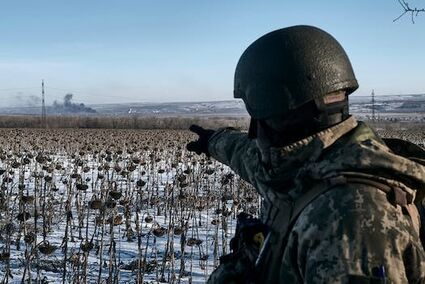 A Ukrainian soldier points at raising smoke on his position in the frontline near Soledar, Donetsk region, Ukraine, Wednesday, Jan. 11, 2023.

KYIV, Ukraine - Russia said Thursday that its forces are edging closer to capturing a salt-mining town in eastern Ukraine, which would mark an elusive victory for the Kremlin but come at the cost of heavy Russian casualties and extensive destruction of the territory they claim.

More than 100 Russian troops were killed in the battle for Soledar over the past 24 hours, Ukraine's Donetsk Gov. Pavlo Kyrylenko said in televised remarks.

"The Russians have literally marched on the bodies of their own soldiers, burning everything on their way," Kyrylenko said while reporting that Russian forces had shelled a dozen towns and villages in the region in the past day.