Vikings believe an unquantifiable connectedness will carry them through the postseason 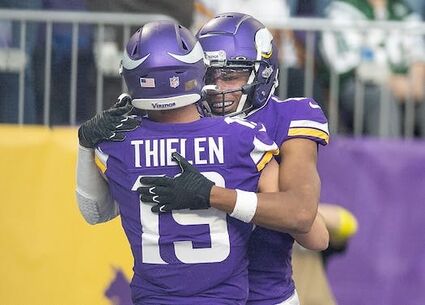 Vikings receivers Adam Thielen and Justin Jefferson celebrate Jefferson's touchdown against the Jets on Dec. 4. Jefferson will play in a playoff game for the first time Sunday.

The U.S. Bank Stadium crowd, which arrived on Dec. 17 anticipating a division title, had let out much of its frustration at the end of a first half after the Vikings fell behind the Colts 33-0. A staleness hung in the air as Adam Thielen paced the sideline before the start of the second half, approaching his teammates with a fist bump and a simple message.

"Hey, I don't care what the score is - I love playing with y'all," said Thielen, who was wearing a live microphone for the game. "I love you guys. Let's go."

There was no motivational master strategy driving the 32-year-old receiver, just an affection he felt compelled to verbalize.