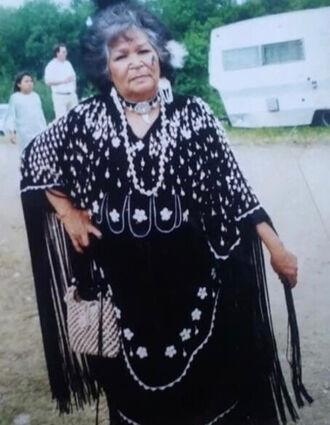 Helen Theresa Lindemann (White) Ga-Ga-Gii-we-EQuay, Raven Woman, was born December 8, 1938, into the Bear Clan and began her spiritual journey home on January 7, 2023, at the age of 84.

Helen was one of sixteen children born to Dan White and RoseMary Mitchell White. She was born at home in Boy Lake MN. Helen was raised and educated in the Boy Lake area.

Helen led a remarkable life filled with many changes. She got sober in 1980, and went on to raise three of her granddaughters from infancy to adulthood. Helen was powerless when it came to driving past a rummage sale sign. It would not happen. She loved thrifting and rummaging and could spend entire days stopping at one rummage sale after another. Helen was also an extraordinary seamstress, beadworker, and regalia maker of the highest order. Her unique and stunning beadwork was unforgettable and recognized by those who saw it. It was best remembered by her magnificent black shell dress that she recreated from a dream of her Grandmother wearing it. This dress she wore for many years dancing in Pow Wows. Helen was an extremely independent and strong woman. For many years, she powered her own chainsaw to cut her own firewood. In her younger days, she loved to hunt. She shot many deer right out of a car window with her trusty 4-10 single shot shotgun to feed her family. Helen was a very traditional full blood Anishinabe Woman. She enjoyed her favorite traditional foods such as venison, fish, grouse, and rabbit, many she snared herself. She also made sucker head soup during the spring sucker run. Helen was an extensive traveler, seeing many states along the way and loved the outdoors. She would spend time picking berries, gathering birch bark, and just enjoying the sounds of the woods. Helen loved rendezvous and living history events. She spent many years traveling with her sister Ruth and son Matt to events all over the state of Minnesota and surrounding states. She slept on the ground in her own birch bark lodge until she was 68 years old at these events. Helen spent time working for the Leech Lake Boys Youth Lodge in Cass Lake in the late 70's. In 1982, she purchased a home on Portage Lake, south of Cass Lake. That is where she would live her life while raising her grandchildren. Helen is greatly loved and will be missed by all who knew her.

The wake will begin at 1:00 P.M. on Friday, January 13, 2023, at the Battle Point Community Center in Sugar Point MN, and continue until the service on Saturday, January 14, 2023. Casketbearers will be family and friends. Interment will be in the spring at the Boy Lake Cemetery. Arrangements provided by Whispering Pines Funeral & Cremation Service of Walker & Hackensack, MN (whisperingpinesnorth.com).