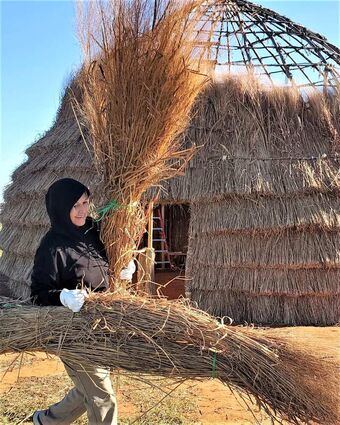 Kay O'Neal, Caddo Nation tribal council member and liaison to the Caddo Mounds State Historic Site near Alto, is a seed person. She enjoys cultivating them and watching them grow, but she also appreciates what they represent in life.

O'Neal led a team of Caddo women along with numerous volunteers, including Caddo Nation members and members of regional groups like Texas Master Naturalists, in the construction of a traditional grass house at the historical site.

The land is where generations of her ancestors lived, raised families and died, O'Neal said. It continues to be a place where Caddo come to reconnect with their culture and where visitors come to learn about Caddo tradition.

A previous grass house built by Caddo members there was destroyed by a tornado in 2019. The Texas Historical Commission, which manages the site, has been working to rebuild the grass house and renovate its museum since the storm.

O'Neal and other Caddo cut the willow branches and pine trees used to construct the frame and harvested switchgrass for thatching. Materials for the house frame were gathered in national forests and the switchgrass was collected from trial plots at research facilities in East Texas, including the Texas A&M AgriLife Research and Extension Center in Overton.

Over recent weeks, O'Neal and her team completed the thatching process.

"It was an emotional time for us," she said. "It's very important to share our culture the traditional way and to pass it on to future generations of Caddo. Some things can't be passed on through books. It has to be hands-on, and building this grass house helps us make sure this integral part of Caddo families' lives does not become a lost art."

Texas A&M AgriLife's involvement in the project was serendipitous. The Caddo grass house's frame was assembled in 2020, but the availability of switchgrass held construction up.

Monte Rouquette, Ph.D., AgriLife Research forage physiologist, runs the switchgrass trial plots at the center in Overton. The plots are part of a major research evaluation of switchgrass genotypes according to the environment.

The research project is headed by Tom Juenger, Ph.D., a biologist at the University of Texas in Austin, who collaborates with researchers within various agencies and institutions to grow switchgrass in plots at 12 locations across five U.S. Department of Agriculture hardiness zones from Kingsville to South Dakota for data collection.

The site at Overton was initiated in 2015 and contains 450 individual transplanted plants to evaluate crosses between upland and lowland cultivars.

"It is a major evaluation project, and it's the only reason switchgrass is here in Overton," Rouquette said. "Everyone was on board with the cuttings going to the Caddo Mounds project once the idea was in motion. It's great to see the harvest go to use, especially in a way that has value to such an important historical and cultural site here in East Texas."

Planting a seed, watching it grow

Benton is proud the switchgrass grown at a Texas A&M AgriLife facility found its way to the construction project. She has partnered with the Texas Historical Commission at the Caddo Mounds site to help manage the Snake Woman's Garden and provide educational programming.

Caddo people lived on and farmed the historic site, she said. The site, the mounds, the house and garden are tangible representations of the history that connect visitors to Caddo tradition and culture.

"Connecting people with Caddo tradition is important," she said. "It's important for the Caddo people to reconnect and share the culture and for visitors to connect with history. The fact that our research could relate to history and something as culturally significant as the house is a beautiful example of the intersection between the past and the future."

The previous grass house was built in 2016 by Caddo members and was a major contribution to increased interest in the Caddo Mounds Historic Site, said site manager Tony Souther, Texas Historical Commission. Before the grass house was built, around 4,000 people visited the site each year. The year before the tornado, the site drew around 12,000 visitors. 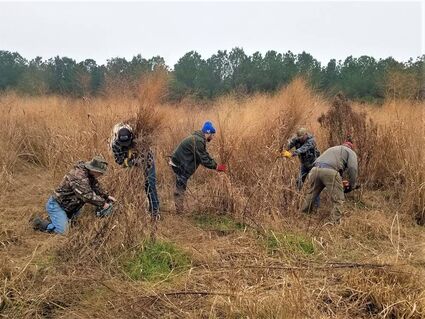 Souther said the grass house is just a piece of the commission's main goal with the site – to make it worthy of Caddo Nation and encourage members to visit and share traditional and modern Caddo culture with each other and visitors.

O'Neal said she is excited to return to the site now that the grass house is complete.

She is grateful for the opportunity to learn the tradition and teach others with this build. She hopes to construct another grass house at the Caddo Nation headquarters in Oklahoma. She brought back switchgrass seeds from the harvests to sow around her land in Oklahoma for that reason and to connect with a plant that played such an important role in her ancestors' lives.

Construction of the grass house is like a seed, she said. It is one tangible piece of tradition that will spread knowledge and appreciation for Caddo culture.

"It is a part of us," she said. "It's important for us to go back to ancestral land and connect our own lives to ancient Caddo tradition so that we can get a glimpse of who we are and why we are."