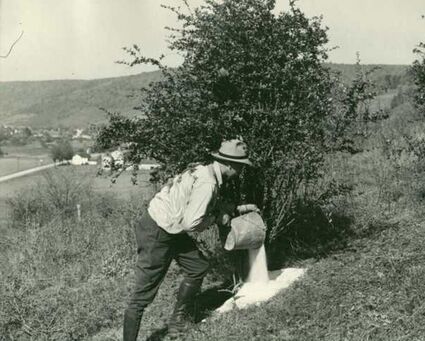 Prior to the availability of herbicides, salt was poured at the base of barberry plants to kill them. Photo by mnopeida.org

At least one million common barberry (Berberis vulgaris) plants were destroyed in Minnesota from 1918 to 1990 in a joint state and federal eradication program. Common barberry hosts black stem rust (Puccinia graminis), a pathogen that historically caused yield losses of up to 70% of wheat, barley, and other small grains over large areas.

Many Minnesotans participated in common barberry eradication. Children were enlisted to find and report plants. Prior to the availability of herbicides, men piled salt at the base of barberry to kill the plants. The salt was hauled by rail then transported by horse-drawn carriages. Nationally, over 500 million plants were destroyed over several decades. The program was considered a major success. Unfortunately, it ended before all common barberry plants were eradicated. Infestation may be making a comeback; a few reports have trickled in over the years and late in 2022, there was a credible report in Duluth that will be followed up on in 2023.

USDA researchers based at the Cereal Disease Lab in St. Paul monitor known populations of common barberry and study the pathogens on them. However, there are additional common barberry plants present that are undetected and unmonitored. Please report common barberry with EDDMapS (free app for field reporting available on the Google Play and Apple stores) or Report a Pest. 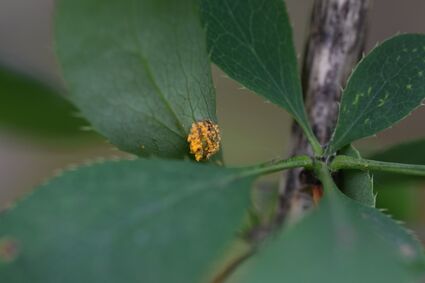 The USDA tests all cultivars of Japanese barberry (Berberis thunbergii), a related species widely used as an ornamental, for resistance to black stem rust. Issues may arise if Japanese barberry escapes from managed landscapes and crosses with common barberry to form a hybrid that may not be disease resistant.

View photos of the flowers and fruits, as well as plants and spines, of Japanese and common barberry. (Photos 5448996, 5448976 and 5448987 courtesy of Leslie J. Mehrhoff, University of Connecticut, Bugwood.org)

Common barberry is native to central and southern Europe, northwest Africa, and western Asia. North American settlers from Europe considered it to be a useful plant as an ornamental, for the fruit, and medicinal uses and because the tall, thorny shrubs could form a living fence. Unfortunately, common barberry escaped cultivation after it was brought to North America.