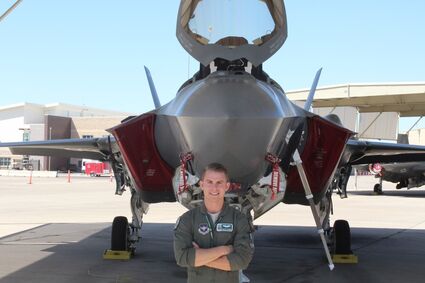 Austin Fairris poses in front of an F-35A at Luke Air Force Base Arizona.

Austin Fairris has known for a long time that he wanted to serve.

"I was drawn to public service and liked the idea of being part of an organization whose first priority was the protection of America and its people," said Fairris.

He grew up in the suburbs of Dallas, Texas, in the Farmers Branch-Carrollton area, graduating from R. L. Turner High School. He studied the challenging field of industrial systems in engineering for five years at Texas A&M University in College Station, while entering the Corps of Cadets, a small military school within the university.

"I was essentially a normal student except I had additional activities to do with the Corps. I had to wake up every day to do PT (physical training) in the early morning, I wore my uniform and so on. This was all to gain a commission into the Air Force, which I finally got to do in 2018 through the Reserve Officer Training Corps (ROTC) Program at A&M," Fairris said.

In October 2018, he found himself moving to Vance Air Force Base in Enid, Oklahoma. For a year and a half, he learned to fly different aircraft to prepare him for a career as a pilot in the Air Force. At the end of training, he was selected to fly the F-35.

"The F-35 is the Air Force's newest fighter jet. I fly the A model specifically. The A model takes off and lands like a normal airplane would. It's brand-new, and it has the most advanced sensors, radios and stealth features that make it hard to detect by the enemy. It's an incredible jet," Fairris said.

"The amount of situational awareness that you can have in the air with it is absolutely amazing. That's not really been a thing in fighter jets previously. Typically, you would have someone on the ground telling you what is going on. It's manufactured by a company called Lockheed Martin," he continued.

"I'm actually here in Fort Worth right now in a class taught by Lockheed Martin to learn more about the jet. F-35 training teaches you about the systems, the radar and so on. But in this class, it's more in-depth, more about the beeps and squeaks of how the jet works. It's 43,000 pounds of thrust in full afterburning. It's 9G capable, which basically means if you yank back on the stick as hard as you can, it feels nine times heavier than usual, so you have nine times the force of gravity working against you, and it can go up to about 1.6 times the speed of sound. It's extremely capable, and I'm fortunate to find myself in it."

Before his class in Fort Worth, he completed training in Phoenix, Arizona, before moving to his current home in Fairbanks, Alaska, where he is qualified to fly. He started as an F-35 combat pilot in Fairbanks in July 2021.

"When I was 12 or 13, I went to an air show. I think it was the Navy, their own fighter jet aerobatic display called Blue Angels. I was drawn to fighter jets ever since then. So, my love for fighter jets with my desire to do something in public service naturally drew me to the military, and the Air Force stood out amongst the other branches," said Fairris.

He said military service has given as much to him as he feels he gives to it.

"If you are thinking about joining the military, first and foremost, you have to know that, yes, there is a lot you can do for the country and the American people through the military, but there is also a lot it can do for you. There are a lot of advantages. And if you want to be a pilot, you have to be willing to jump through all the hoops, do all the paperwork, make all the deadlines," he continued.

"When you have your goal set out, work every day to take the next step on your path to meet it. You also need to know the means necessary to meet those goals. If you just follow the steps, you will find yourself exactly where you want to be," Fairris said.

Fairris' Chickasaw ancestry comes from his dad's side of the family, specifically his great-great-grandfather Charles Curtis Calhoon, he said.

"My dad was adopted at a young age, so it wasn't until later in life that we realized we were Chickasaw. From there, we started exploring our native heritage and tracing back our lineage. We found several family members we didn't know existed, some even lived right by us. The Chickasaw Nation, as I have found, is the most generous organization I've ever heard of in my entire life. It continuously amazes me how they take care of their people."

Family, community and acceptance are highly revered in Fairris' life.

"My biggest encouragement throughout my life is the fact that my parents did a lot for me when I was a kid. I had a great childhood, and I owe where I am now to them. I want to make them proud," he said.

Fairris left his home in sunny Dallas to endure the brutal winters of Fairbanks, Alaska, an isolated town six hours from any other center of civilization.

"It is a big shift moving out here, but the thing is, the Air Force has been nothing short of incredible. It is extremely family oriented. When it comes down to the squadron, the 40 guys I go to work with every day, our commanders and leaders, everyone is super focused on giving people the time they need to spend with their families," said Fairris.

"They are also welcoming to new people. They welcomed me and my wife, Hailey, with open arms. The community is one of the biggest drivers to keep people in the Air Force. No one does it for the money. It's the job and the people that you build lifelong friendships with. It's true that we are isolated out here and tickets home are insanely expensive, but we have a second family here. That is the most important thing."

Fairris has an incredibly positive attitude and takes on the Fairbanks life as an exciting adventure. "It was a totally different way of living when I moved out here. It changes everything about your daily routine, from picking safe clothes and shoes to finding a way to get to work without flipping your car over. But the summers are great," Fairris added. "They are 70 or 80 degrees every day. I love doing outdoorsy things like fishing and camping, and there is a lot of that here. I get to watch football with my friends, go on vacation together. We get to create amazing bonds. Me and my wife have an 8-month-old golden retriever named Henry that I like to play with," Fairris continued.

He also uses music to relax after a stressful day of work. "Being a fighter pilot in the Air Force is a high-paced job, so I listen to chill, indie music. I saw the new Elvis movie a couple weeks ago, so I've also been on an Elvis kick," Fairris chuckled.

"It's in the single digits now and we have 6 or 7 inches of snow," said Fairris during the late October weather. "I'd say it will probably get down to negative 40 this winter with 4 or 5 feet of snow that can last anywhere from November to late March. It's so far north that the shortest day in the winter is only an hour or so. But it is what all things in life are, good or bad, it is an experience."