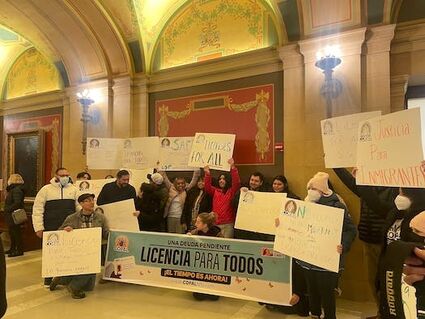 Driver's Licenses for All campaign supporters gather after a House Transportation Committee meeting at the Minnesota State Capitol on Tuesday, Jan. 10, 2023.

"Si se puede, si se puede!" Advocates cheered and held signs in two languages inside the State Capitol on Tuesday to commemorate a key first reading of a bill that calls for access to driver's licenses for immigrants in Minnesota without legal status.

The Driver's Licenses for All bill would allow unauthorized immigrants to obtain a driver's license without showing proof of legal residence in the United States. It had its first reading in the Minnesota House Transportation Committee.

The bill is co-led by Rep. Aisha Gomez, DFL-Minneapolis, and Rep. Maria Isa Pérez-Vega, DFL-St. Paul. The transportation committee heard testimony from community organizers and those who have experienced the barriers associated with the lack of a license.