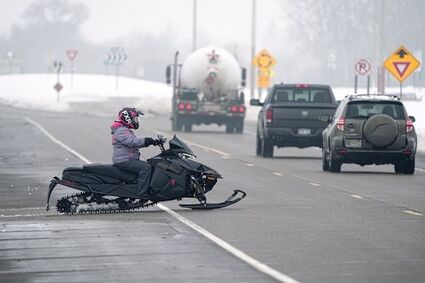 Snowmobilers crossing Hwy. 61 to get to the Star Trail between Forest Lake and Hugo have to navigate high snowbanks and traffic Tuesday in Hugo. The state has seen six deaths from snowmobiling this winter.

DULUTH - Not even midway through winter, the number of snowmobile fatalities in Minnesota equals the total that died while riding all last winter.

Six people have died in snowmobile accidents in the past 10 days: Three were killed over the weekend, including a 12-year-old boy in southeastern Minnesota on Sunday, and a 55-year-old woman in northeastern Minnesota and a 64-year-old man in the western part of the state Saturday; two 21-year-olds died after a New Year's Day crash in Isanti County, and a 52-year-old man died while snowmobiling in Zimmerman on Dec. 31.

"One fatality is one too many," said Capt. Jon Paurus, the education enforcement and safety training manager for the Minnesota Department of Natural Resources, which keeps state records on snowmobile fatalities.