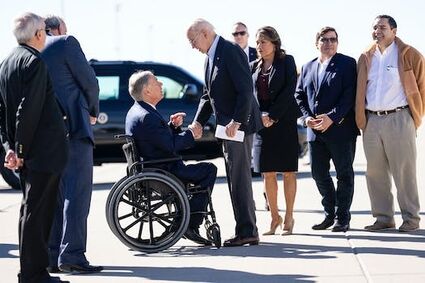 EL PASO, Texas - President Joe Biden walked a muddy stretch of the U.S.-Mexico border and inspected a busy port of entry Sunday on his first trip to the region after two years in office, a visit shadowed by the fraught politics of immigration as Republicans blame him for record numbers of migrants crossing into the country.

At his first stop, the president observed as border officers in El Paso demonstrated how they search vehicles for drugs, money and other contraband. Next, he traveled to a dusty street with abandoned buildings and walked along a metal border fence that separated the U.S. city from Ciudad Juarez.

His last stop was the El Paso County Migrant Services Center - but there were no migrants in sight. As he learned about the services offered there, he asked an aid worker, "If I could wave the wand, what should I do?" The answer was not audible.