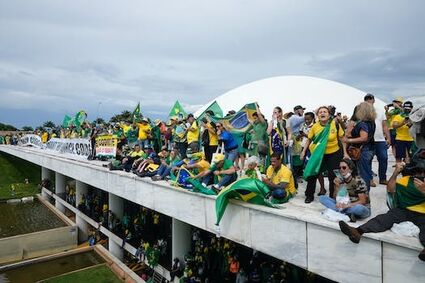 Protesters and supporters of Brazil's former President Jair Bolsonaro, stand on the roof of the National Congress building in Brasilia, Brazil, after they stormed it Sunday.

Thousands of demonstrators bypassed security barricades, climbed on roofs, smashed windows and invaded all three buildings, which were believed to be largely vacant on the weekend. Some of the demonstrators called for a military intervention to either restore the far-right Bolsonaro to power or oust Lula from the presidency.

Hours went by before control of the buildings on Brasilia's vast Three Powers Square was reestablished, with hundreds of the participants arrested.