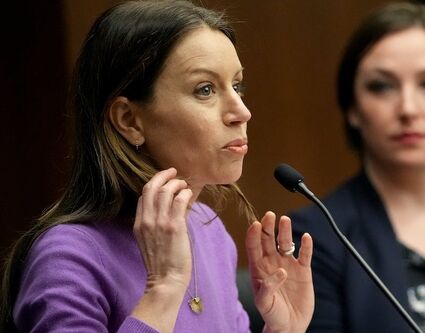 Liz Padilla, left, testified that she once was happily pregnant, only to learn that the fetus was not viable and then chose to terminate the pregnancy. She spoke in favor of codifying abortion protections during a hearing of the House Health and Human Services Finance Committee on Thursday in St. Paul.

A fast-tracked proposal to enshrine access to abortion into Minnesota law cleared its first legislative hurdle on Thursday, signaling newfound urgency on an issue that has been static for years under divided government.

Abortion rights supporters and abortion opponents packed a House hearing and offered more than an hour of emotional testimony on the issue, their first opportunity since the U.S. Supreme Court ruled to overturn Roe v. Wade this summer, sending the issue of abortion back to individual states.

"What happened to Roe could happen in Minnesota," said Rep. Carlie Kotyza-Witthuhn, DFL-Eden Prairie, the sponsor of the proposal in the House. "Over mere months, 15 states across the country have banned abortion."