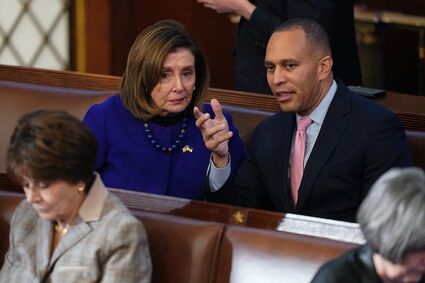 Rep. Hakeem Jeffries, D-N.Y., right, talks with Rep. Nancy Pelosi, D-Calif., during the eighth vote in the House chamber as the House meets for the third day to elect a speaker and convene the 118th Congress in Washington, Thursday, Jan. 5, 2023. (AP Photo/Alex Brandon)

WASHINGTON - For a long and frustrating third day, divided Republicans kept the speaker's chair of the U.S. House empty Thursday, as party leader Kevin McCarthy failed again and again in an excruciating string of ballots to win enough GOP votes to seize the chamber's gavel.

Long after darkness, glimmers of a deal with far-right holdouts were emerging. But the day's tally was dismal: McCarthy lost seventh, eighth and then historic ninth, 10th and 11th rounds of voting, surpassing the number of 100 years ago in the last drawn-out fight to choose a speaker. By nightfall, despite raucous protests from Democrats, Republicans voted to adjourn and return Friday to try again.

The California Republican soaked up the moment without visible concern: "Apparently, I like to make history."