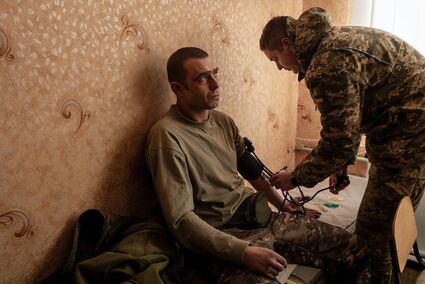 A Ukrainian solider takes a blood pressure reading from a fellow soldier at a military medical stabilization point in the Donetsk region of Ukraine, on Wednesday, Jan. 4, 2023. According to the chief doctor at the hospital, most soldiers are brought in with shrapnel wounds, while others are treated for concussions, minor injuries and common illnesses.

Putin did not appear to condition his cease-fire order on Ukraine's acceptance, and it wasn't clear whether hostilities would actually pause on the 1,100-kilometer (684-mile) front line or elsewhere. Ukrainian President Volodymyr Zelenskyy dismissed the Russian move as playing for time to regroup its invasion forces and prepare additional attacks.

At various points during the war that began Feb. 24, Russian authorities have ordered limited, local truces to allow civilian evacuations or other humanitarian purposes. Thursday's order was the first time Putin has directed his troops to observe a cease-fire throughout Ukraine.