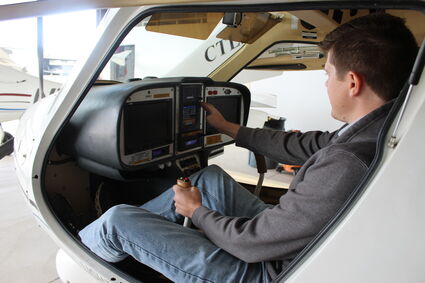 Austin Wallace recently opened the flight school he wishes he went to in Goldsby, Oklahoma. Adventure Air's planes are equipped with some of the best communication and avionic suites in the business. Equipment on select aircraft include glass panel avionics and autopilot controls, among other features.

"Pearl shows us that people crave freedom," Wallace said. "People are going to do what they love. Nothing will stop them. Flying is uniquely challenging. Each day is different. I love getting up in the air and facing the challenge each day presents."

Key features make Wallace's Adventure Air special. While there are many flight schools in Oklahoma, Adventure Air has some of the most state-of-the-art planes in which pilots can hone their skills.

"My experiences learning to fly at the flight schools I have attended have taught me both what to do and what not to do. Adventure Air improves upon the current product offered to pilots," said Wallace, a Chickasaw citizen. "I am making the flight school I wish I went to."

Unlike many flight schools, Adventure Air has newer model planes. This is unique in the flight school industry. Each plane is less than 15 years old at Adventure Air. Most planes student pilots learn to fly in are much older models.

The growth of Adventure Air has been remarkable. Beginning with one plane a little more than a year ago, the fleet now includes five light-sport aircraft. Wallace is one of three flight instructors available to give pilot lessons.

The planes are equipped with some of the best communication and avionic suites in the business. Equipment on select aircraft include glass panel avionics and autopilot controls, among other features.

Safety is paramount at Adventure Air. Each plane has meticulous safety and flight records. Planes are equipped with emergency parachutes capable of being deployed as low as 200 feet above the ground.

With a large number of planes in the fleet, Wallace was required to build a large hanger to store the planes. As well as storing the planes in a heated, insulated environment, the enclosed hanger houses Adventure Air's administrative offices and an area for future pilots to learn in a classroom setting.

According to Wallace, the first step in becoming a pilot at Adventure Air is the discovery flight. The discovery flight is a 45-minute "test drive." One of the school's flight instructors take the fledgling pilot into the air where they pilot the aircraft for the first time. Wallace says this is "make or break time" for prospective pilots.

Geared toward new pilots, the discovery flight does allow seasoned pilots the opportunity to evaluate Adventure Air's planes for themselves, either for future lessons, or to rent the planes later.

Daily operations of Adventure Air include both flight and ground instruction. Pilots learn the ins and outs of aviation while studying during ground instruction, allowing them to pass the knowledge portions of flight tests. Flight school is the actual training in the sky where pilots learn to control an aircraft for themselves.

Adventure Air's planes are available to rent for both short- and long-distance travel. The rental program allows pilots to fly on their own time, without the overhead of owning a personal plane. The cost of mechanical maintenance and time logging information about the plane's upkeep is deferred to Adventure Air, allowing pilots the opportunity to enjoy all the fun aspects of flight without many of the chores accompanying flight.

For more information about Adventure Air, call (850) 454-9446 or visit Facebook.com/AdventureAirOK.

Growing up, Wallace did not see himself becoming a pilot. His father is retired Marine Col. Clarence "Lucky" Wallace, a former military aviator who continues to fly as a private pilot. Wallace lived many places around the world as his family followed his father from duty station to duty station. He considers Pensacola, Florida, his hometown.

"I love Pensacola," Wallace said. "It can be hard to make friends if you are always moving around. Many of the children came from the same sort of military community as me. It was nice having long-term relationships."

Pensacola is a hotbed for military aviation. Considering his father's career and living in Pensacola, being around and talking about aviation was an everyday occurrence for Mr. Wallace. He took aviation for granted as an adolescent and young man.

"We encouraged him to follow his own direction, and we were glad to support him when he ultimately decided to go into aviation. I was just glad it was his decision," Col. Wallace said in a story in the September edition of The Journal Record.

Science, technology, engineering and math (STEM) have always been important to Wallace. He is a gifted mathematician. When he decided to go to college at the University of Central Florida, he chose to study mechanical engineering.

"I like physics," Wallace said. "I am good at math. In high school, I studied a lot of science. I took all the math classes I could. When I learned how much engineers make, it made sense to me that (mechanical) engineering would be a good career field to go into."

However, the more training he received in that career field, the more he learned he did not want to work in an office setting "crunching numbers" all day.

"In the late state of the program, I was taking classes that closely mimicked what I would be doing in my career. Running tests on materials and writing reports wasn't so bad but looking at a whole bunch of numbers on a screen all day long isn't very fun."

While he finished his mechanical engineering degree, Wallace immediately chose to pursue a more hands-on career. Following his father's footsteps, he decided to become a pilot.

"I think that having an introduction at the early stages of life and having role models that people can look up to really helps," Wallace said.

In 2017, he began his path in aviation and became a certified flight instructor in 2020. He began teaching at a flight school in Chickasha, Oklahoma. Wallace continues to learn the ins and outs of being an aircraft pilot. According to him, a pilot never truly finishes pilot training. 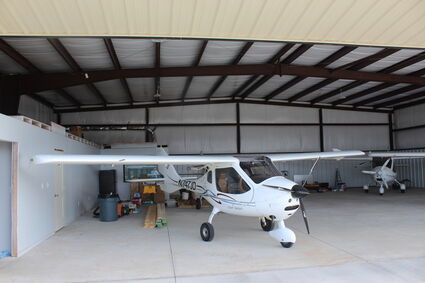 "Aviation gives a reason for pilots to understand how science plays into flight," Wallace said. "Getting students to study is the hardest part in being a flight instructor. I have succeeded because the reward is being able to fly. You can make yourself learn just about anything when you have a reward that is that great."

Wallace credits his family and the Chickasaw Nation with providing him educational opportunities and a career he is passionate about.

"Having the opportunity to learn a trade and receive licensing is important, especially in Oklahoma's economy," Wallace said. "Getting these licenses has allowed me to have a life that I never expected."