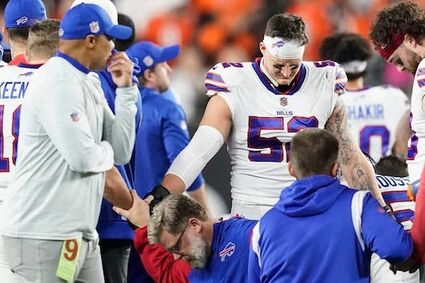 Bills players and staff prayed for safety Damar Hamlin during the first half of a game against the Bengals on Monday. The game has been indefinitely postponed by the NFL after Hamlin collapsed during the game.

The league informed the Buffalo Bills and Cincinnati Bengals that their game, suspended Monday night, would not be resumed this week while the Week 18 schedule remained unchanged, for now.

No decision regarding the possible resumption of the pivotal Bills-Bengals game has been made. The game was suspended in the first quarter when Hamlin suffered the cardiac arrest after making a tackle.