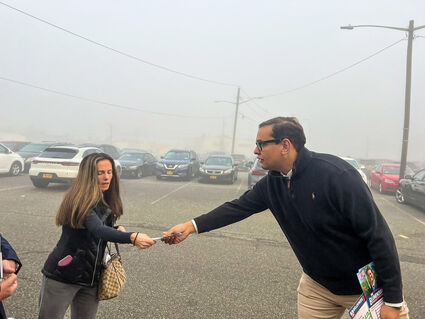 Republican George Santos, right, is seen on the campaign trail in New York's 3rd Congressional district shortly before the November 8, 2022, in which he secured a seat in the U.S. House of Representatives. Photo: Santos4Congress

This story was originally published in the Forward. Click here to get the Forward's free email newsletters delivered to your inbox.

As George Santos prepares to take the oath of office Tuesday afternoon, still more is emerging about the New York congressman-elect, who has been caught in a web of lies about his background, including his claims that he is Jewish.

In a newly surfaced video from an interview last May, Santos made an unsubstantiated claim about 93-year-old Selma Schumer's feelings about her son, Senate Majority Leader Chuck Schumer. Other interviews show that Santos described himself specifically as a "Latino Jew" and tried to leverage his status as both a racial and religious minority.

His comments about Schumer's mother are from a podcast interview with radio host Charles Moscowitz on May 13, 2022, in which Santos claims to have spoken personally to her.