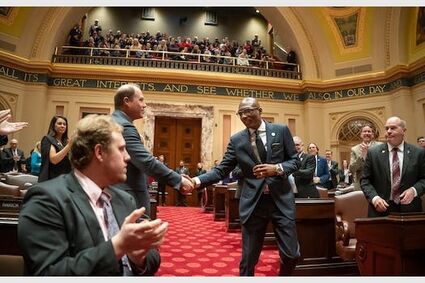 DFL Sen. Bobby Joe Champion shook hands with other members of the Senate as he was called to be sworn in as the first Black Senate President.

The most diverse group of Minnesota legislators ever raised their right hands Tuesday on the floor of the House and Senate, many making history as they took the oath of office.

Proud spouses and squirming children packed the two chambers, creating an unfamiliar scene after years of pandemic restrictions. Lawmakers greeted each other with hugs and handshakes, welcoming newcomers who included the first three Black women to serve in the Senate and the first transgender and nonbinary representatives in the House.

"Minnesota state government is increasingly reflective of the people of Minnesota," said DFL House Speaker Melissa Hortman, noting that there are 35 legislators of color and that several leadership roles will be held by women and people of color for the first time.