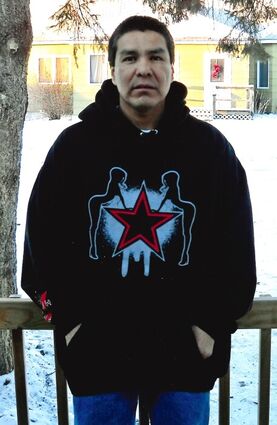 Ducky was born in Minneapolis, MN, the son of Margaret (Beaulieu) and Kenneth Smith on April 26, 1971. He grew up in Minneapolis, Bemidji, and Cass Lake. He attended schools in Bemidji and Cass Lake and in 1991 he received his GED. Ducky traveled and worked in Crookston and Grand Forks and attended the Ironworkers School in Florida. He later worked at the Northern Lights Casino as a bartender and bar server. Ducky loved watching wrestling, his favorite wrestler was Edge because he was the "Rated R Superstar". He loved his San Francisco 49'ers. Enjoyed raising hell with his nephews and nieces. Ducky loved his rock and roll music and was always making everyone listen to it. He loved being outdoors but especially enjoyed pinecone and bough picking, ricing, and jogging; sometimes up to 12 miles a day. He also like helping with snow shoveling, raking, and cleaning up his yard. Ducky loved playing the slots and going to his favorite bar the Big Tap.

An overnight wake for Ducky will begin at 2:00 p.m. on January 3, 2023 and continue until his 1:00 p.m. traditional service on January 4, 2023 all to be held at the Veteran's Memorial Building in Cass Lake, MN. His spiritual advisor will be Jason Hart. Pallbearers for Ducky are Ken Smith, Jr., Michael Dunkley III, Richard Beaulieu, Darrick Beaulieu, Dave Smith, and Brandon Beaulieu. Alternate pallbearers are Aaron Jones, Jr., John White, Scott White, Zack White, and Ralph White. His honorary pallbearers are Tony LeDeaux, Lynette "Squeege" Morris, Ronald "Ringo" Smith, Markis Washington, Brent White and all of Ducky's family. Interment will be in the Old Agency Catholic Cemetery in Onigum, MN following his services.

Ducky's care has been entrusted to Northern Peace Funeral Home of Walker, MN. Online condolences for the family may be left at http://www.northernpeace.com