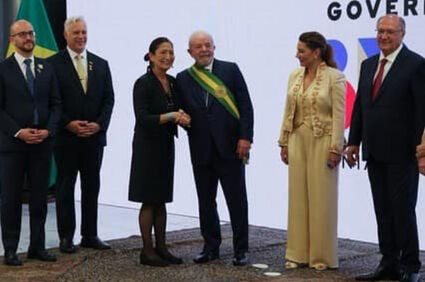 The first Native American to serve in a secretarial position within a presidential cabinet, U.S. Secretary of the Interior Deb Haaland (Laguna Pueblo)on Sunday, January 1, 2023, led the Presidential Delegation of the United States on behalf of President Joe Biden to the presidential Inauguration of His Excellency Luiz Inácio Lula da Silva.

"I was honored to represent President Biden, our administration, and the American people at President Lula's inauguration and to celebrate the longstanding and important partnership between the United States and Brazil," Secretary Haaland said. "Our shared commitment to democracy, human rights, Indigenous peoples, equitable economic growth, environmental protection, and other core values makes us natural partners. The Biden-Harris administration intends to use every opportunity to broaden and deepen that partnership with President Lula's government in the years to come."

This will be Lula's third term, after previously governing Brazil for two consecutive terms between 2003 and 2010.