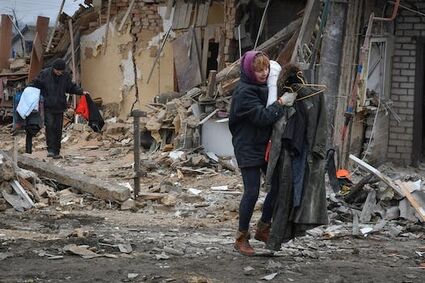 Local residents carry their belongings as they leave their home ruined in the Saturday Russian rocket attack in Zaporizhzhya, Ukraine, Sunday, Jan. 1, 2023.

KYIV, Ukraine - Ukrainian forces fired rockets at a facility in the eastern Donetsk region where Russian soldiers were stationed, killing 63 of them, Russia's defense ministry said Monday, in one of the deadliest attacks on the Kremlin's forces since the war began more than 10 months ago.

Ukrainian forces fired six rockets from a HIMARS launch system and two of them were shot down, a defense ministry statement said. It did not say when the strike happened.

The strike, using a U.S.-supplied precision weapon that has proven critical in enabling Ukrainian forces to hit key targets, delivered a new setback for Russia which in recent months has reeled from a Ukrainian counteroffensive.