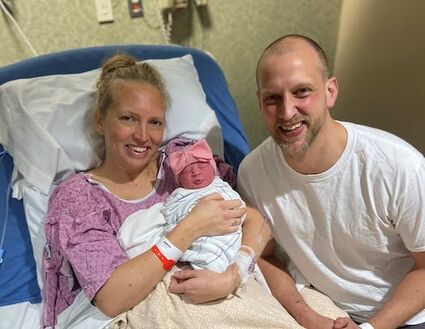 Isabelle Alice Koopman, pictured with parents Ashley and Cameron Koopman, was born at midnight as the new year began.

Ashley Koopman's second child wasn't due for another week, so she spent the final day of 2022 playing in the snow with her toddler son. But when contractions started around 8:15 p.m., she and her husband, Cameron, started joking about the New Year's babies who make the news each year: How crazy would it be if their baby girl was the inaugural baby of 2023?

At midnight in a room at Maple Grove Hospital, that became more than a jest. With just one push from mom, Isabelle Alice Koopman, weighing 6 pounds, 15 ounces, was born. She's believed to be Minnesota's first baby of the new year.

"It seemed like it was up to her," said Koopman, who said she wasn't expecting such a fast delivery. "She wanted out, and she wanted to be special. She, of course, was special already, but now she's extra special."