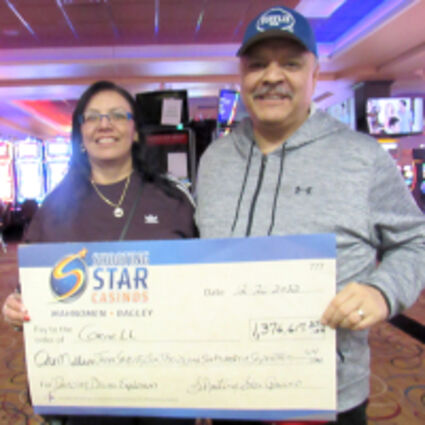 FARGO, N.D. – Shooting Star Casino is celebrating a huge jackpot win by Cornell Mclean Sr. on Monday, December 26, 2022, during the casino's Boxing Day promotion for Canadian guests. Mclean, his wife Lisa and their daughter and son-in-law were traveling from Winnipeg through Mahnomen on a quiet getaway after a hectic Christmas season. After sitting at the border for over an hour there were thoughts of just turning back, but Mclean felt the getaway was much needed. Looking back, he's glad they didn't turn around.

Mclean sat down in front of a Dancing Drums Explosion slot machine and on the second push of the spin button, saw drums explode and realized he had just won a jackpot. At first, he believed the jackpot was about $13,000. However, he was quickly alerted to the fact that his jackpot was a bit higher than that – over $1.37 million!

When asked about his plans for the money, McLean said he gave it to his wife. The pair have been saving to buy a home. "We'll be able to buy a new house now," shares Mclean. "I also plan to share with my three siblings." In addition, he says they have a big family with five children and 16 grandchildren, two of whom he and his wife are legal guardians of. So, the money will be used for them as well.

You won't see much of a change in how the Mcleans live their lives after the win. Mclean said, "We'll keep doing what we've been doing, this won't change how we live." Others have pointed out that he has been blessed because of the way he lives his life giving back to others.

Shooting Star Casino, located in Mahnomen, Minnesota, is regarded as one of the state's premier casino experiences. Proudly owned and operated by White Earth Nation, it includes amenities such as Las Vegas-style gambling, nearly 30,000 square feet of event/meeting space, a full restaurant and bar, and a hotel connected directly to the main building. The casino also boasts a well-appointed stage venue for concerts, hosting big names such as Tanya Tucker, Chris Janson, and Trace Adkins. Shooting Star, through these numerous accommodations and emphasis on customer service, aims to provide the very best casino experience possible to every guest.