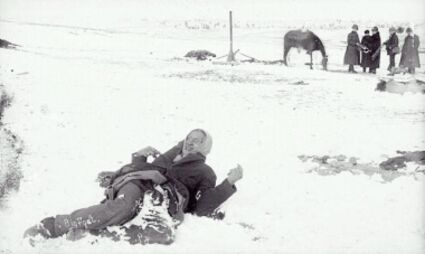 The Wounded Knee Massacre is when most American history books drop American Indians from history.

Opinion. Editor's Note: This commentary was originally published by Native News Online in December 2013. It has been updated to reflect 132 years that have passed since the tragic day.

One hundred and thirty-two winters ago, on December 29, 1890, some 150 Lakota men, women and children were massacred by the US 7th Cavalry Regiment near Wounded Knee Creek on the Pine Ridge Indian Reservation. Some estimate the actual number closer to 300.

Snowfall was heavy that December week. The Lakota ancestors killed that day were left in brutal frigid wintry plains of the reservation before a burial party came to bury them in one mass grave. The photograph of Big Foot's frozen and contorted body is a symbol for all American Indians of what happened to our ancestors.