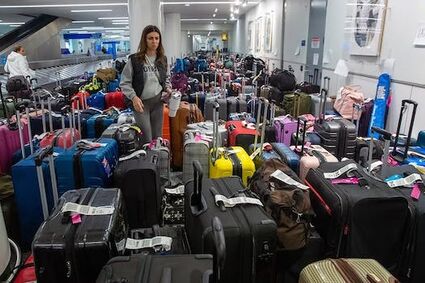 Southwest passenger Amanda Gevorgyan looks for her luggage among hundreds of bags from Southwest Airlines flight cancellations at LAX.

DALLAS - Southwest Airlines said it expects to return to normal operations Friday after more than a week of widespread flight cancellations that started with a winter storm and spiraled out of control because of a breakdown with staffing technology.

If Thursday turns out to be the last day of the Southwest crisis, it will be marked by about 2,350 canceled flights, nearly 60% of the airline's schedule.

Southwest declined to say how many people have been affected, but it is likely that far more than 1 million have had a flight canceled.