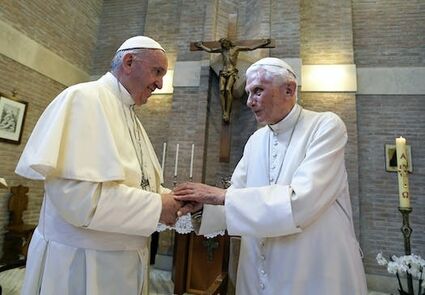 FILE - In this June 28, 2017, file photo, Pope Francis, left, and Pope Benedict XVI, meet each other on the occasion of the elevation of five new cardinals at the Vatican.

VATICAN CITY - Pope Emeritus Benedict XVI 's health has worsened over the past hours due to advanced age and doctors are constantly monitoring his condition, the Vatican said Wednesday, as Pope Francis appealed to the faithful to pray for his "very ill" predecessor "until the end."

Vatican spokesperson Matteo Bruni said Francis went to visit the frail, 95-year-old Benedict in the monastery on Vatican grounds where he has lived since retiring in February 2013.

"Regarding the health condition of the emeritus pope, for whom Pope Francis asked for prayers at the end of his general audience this morning, I can confirm that in the last hours, a worsening due to advanced age has happened,'' Bruni said in a written statement.