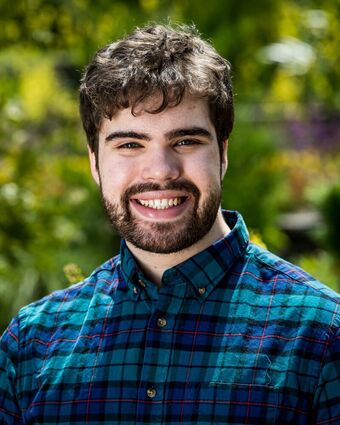 Quinn Smith, an ambitious public policy major and senior at Duke University, has made great strides in First American advocacy during his college years. He received the Udall Scholar in Tribal Public Policy fellowship and was a Truman Scholar finalist. In fact, he has found a way to enter a fellowship every semester.

"I have found different ways to apply my passion for writing and documentary storytelling that works to benefit Native people and issues," said Smith.

During his freshman year, he created a documentary about the Blackfeet Nation for the Indian Arts and Crafts Board, U.S. Department of the Interior.

"They gave me a 400-image archive and three elders' contacts and just said, 'Go make me a documentary,' so that was pretty hard," he chuckled. "Luckily, I had a class before which was on documentary photography, so it taught me the skills I needed. I was able to publish it through the Department of the Interior, and it gained a lot of traction."

"'The Blackfeet, The Great Northern Railway, and Glacier National Park' is a documentary that explores the history and worldviews of the Blackfeet people. It talks about how Glacier National Park was created, which is similar to how all national parks are made, meaning they remove the Native people from their land and bar them from entering," Smith said.

During his sophomore year, he was a part of two programs, the Hart Leadership Program and a Kenan Institute for Ethics' program called the Race 2020 Scholar's Program in which he investigated issues of race across the United States. Part of this experience was working for a popular First American-led podcast called All My Relations. It is co-hosted by First American photographer Matika Wilbur and First American Brown University scholar Adrienne Keene. Keene runs the blog "Native Appropriations" and published the book "Notable Native People: 50 Indigenous Leaders, Dreamers, and Changemakers from Past and Present."

That year, Smith also began writing for his school newspaper and doing First American advocacy work through op-eds, which he continues to do as the president of the Native American/Indigenous Student Alliance at Duke.

"My op-eds were discovered by Ancestry.com, and they hired me to do communications work about Indigenous DNA. I reviewed content for cultural sensitivity and wrote history about many tribes, including the Chickasaw Nation," Smith said. "The issue of Native American DNA is a very difficult topic that a lot of people don't understand. Unfortunately, 23andMe had a billboard, and Ancestry.com had an article titled 'Find your family's Native American tribe,' so I really needed to write an FAQ section explaining to people that Native people still exist, that there is a difference between citizenship, kinship, ancestry, DNA, and so on. I had to explain how just because you have Indigenous DNA does not make you a tribal citizen."

Smith also wrote the history blurbs that pop up if someone does find DNA links to these communities, incorporating the appropriate cultural sensitivity and disclaimers to non-First American people who might be using the data in harmful ways.

"So, I wrote data from the 1600s to today, every 25 years of history I would write a 100-word write-up of history for Southeastern, Northeastern and, in the future, Northwestern tribal nations," Smith said.

Another company that discovered Smith through his op-eds was ClickView, an educational company headquartered in Australia that creates resources for K-12 educators around the world to use in the classroom. Smith wrote a four-part video series on multiple tribal nations and covered topics like Thanksgiving and the Indian Removal Act (1830). In his professional experiences and personal life, Smith has witnessed a general lack of understanding of First American peoples and their history. He strongly believes that educating the youth is a crucial step in bringing about positive change for First Americans.

"During junior year, I wrote an op-ed that was published in Indian Country Today about increasing support for Indigenous students at Duke. And then I routed a petition for that to gain traction," Smith said. "The Student Alliance worked together on this project, and I provided a narrative role in it.

"Since then, I was able to be a part of the Brodhead Fellowship program, where I was able to come to Ada and work with (the Chickasaw Nation) on the Heritage Series, which was an incredible experience. I went from a world where I am having to educate every day that Native people still exist, to one where everybody already knew that, and everyone was working to advance the tribe's goals. It was fantastic."

Smith was also the essay section winner of the Chickasaw Nation Anolí Creative Writing Contest during the summer 2022 challenge.

"After the summer, I was in Los Angeles for a study abroad program called Duke in L.A. I worked for a documentary company out there called Tripod Media. We were doing a documentary on Pamela Anderson, so it was super interesting to see what a professional company does. Before this, I had only been doing things on my own," he said.

Avid studier and lover of screenwriting, Smith wrote a comedic pilot about First American student experiences at an Ivy League institution that was accepted by a program called StudioDuke, where participants are paired with a mentor who is an alumni in the entertainment industry.

"I was very lucky to get into that program and be paired with Robb Chavis. He was the co-executive producer for 'Black-ish' on NBC," he added.

One of his ongoing creative endeavors is a project, Equity Through Stories, a program in partnership with Duke Gardens.

"I interviewed elders and tribal members throughout North and South Carolina about their relationships with the land, then created a few different podcasts from these stories," said Smith. "I also made an interactive exhibit in the gardens where you can read about the stories and scan a QR code with your phone off signs and listen to an elder talk to you."

He made another exhibit called "Still" at Duke as part of a professional development award. The exhibit shows the disgraceful exploitative nature of galleries and museums throughout history that contain First American artifacts and remains. It encourages viewers to educate themselves about First American peoples and offers a set of definitions that are helpful to understand tribal nations today.

"The key to finding success in my industry so far has been just taking every opportunity that I could, even if it didn't seem totally aligned with what I wanted to do. When I first got the email from Ancestry, I thought it was just a promotional link or something, but then I looked into it more, and I was even more hesitant, because what they wanted me to write about was a dangerous subject to touch. I want to be a screenwriter too, so it was just tangentially related to my field. But it was so worth it, because it was a step down the road I'm trying to take, and I also learned so much from it," Smith said. "Ever since then, I know to seize every opportunity and make the project as useful to my learning experience as possible, as well as make it relevant to Native advocacy in any way I can."

Smith's long-term goals consist of becoming a screenwriter and writing his own shows.

"I want to talk about diverse Indigenous experiences in my work, and I'd also like to write for shows like 'Reservation Dogs,' of course," he chuckled. "I would love to see myself working for something like the Native American Rights Fund or the Chickasaw Nation, while doing personal creative work on the side."