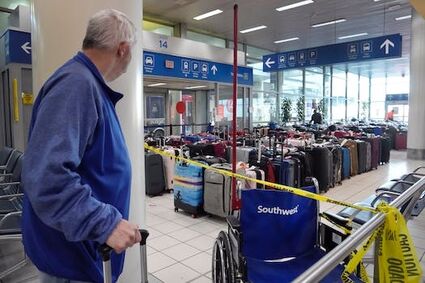 A traveler looks at luggage in the baggage claim area inside the Southwest Airlines terminal at St. Louis Lambert International Airport, Wednesday, Dec. 28, 2022, in St. Louis.

DALLAS - Travelers who counted on Southwest Airlines to get them home suffered another wave of canceled flights Wednesday, and pressure grew on the federal government to help customers get reimbursed for unexpected expenses they incurred because of the airline's meltdown.

Exhausted Southwest travelers tried finding seats on other airlines or renting cars to get to their destination, but many remained stranded. The airline's CEO said it could be next week before the flight schedule returns to normal.

Adontis Barber, a 34-year-old jazz pianist from Kansas City, Missouri, had camped out in the city's airport since his Southwest flight was canceled Saturday, hoping to reach a New Year's gig in Washington, D.C.