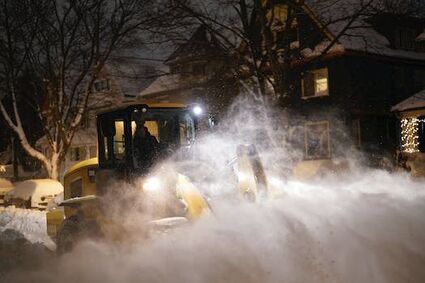 A city worker in a wheel loader clears snow on Norwood Avenue as crews work through the night to reopen the city after a deadly blizzard over the weekend, Monday, Dec. 26, 2022.

Even as suburban roads and most major highways in the area reopened, Erie County Executive Mark Poloncarz warned that police would be stationed at entrances to Buffalo and at major intersections because some drivers were flouting a ban on driving within New York's second-most populous city.

More than 30 people are reported to have died in the region, officials said, including seven storm-related deaths announced Tuesday by Buffalo Mayor Byron Brown's office. The toll surpasses that of the historic Blizzard of 1977, blamed for killing as many as 29 people in an area known for harsh winter weather.