Lavrov: Ukraine must demilitarize or Russia will do it 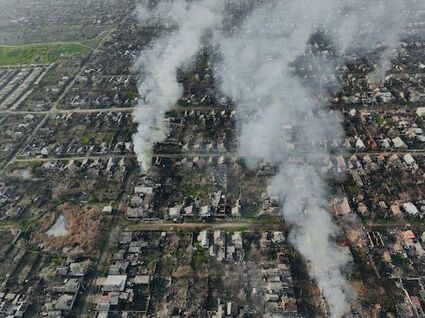 Smoke billows after Russian attacks in the outskirts of Bakhmut, Ukraine, Tuesday, Dec. 27, 2022.

KYIV, Ukraine - Russia's foreign minister on Tuesday warned anew Ukraine that it must demilitarize, threatening further military action and falsely accusing Kyiv and the West of fueling the war that started with Moscow's invasion.

Sergey Lavrov said Ukraine must remove any military threat to Russia - otherwise "the Russian army (will) solve the issue." His comments also reflected persistent unfounded claims by the Kremlin that Ukraine and its Western allies were responsible for the 10-month war, which has killed tens of thousands of people and displaced millions.

Russia launched the war on Feb. 24, alleging a threat to its security and a plot to bring NATO to its doorstep. Lavrov reiterated on Tuesday that the West was feeding the war in Ukraine to weaken Russia, and said that it depends on Kyiv and Washington how long the conflict will last.