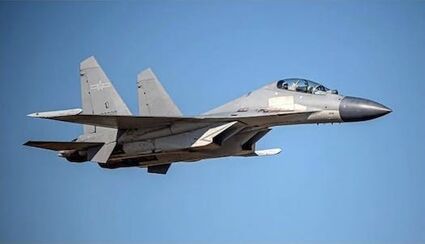 In this undated file photo released by the Taiwan Ministry of Defense, a Chinese PLA J-16 fighter jet flies in an undisclosed location.

China's military harassment of Taiwan, which it claims is its own territory, has intensified in recent years, and the Communist Party's People's Liberation Army has sent planes or ships toward the island on a near-daily basis.

Between 6 a.m. Sunday and 6 a.m. Monday, 47 of the Chinese planes crossed the median of the Taiwan Strait, an unofficial boundary once tacitly accepted by both sides, according to Taiwan's Ministry of National Defense.