Organizers say the 2022 ride will mark the end of the annual tradition since 2005, but they're planning a new chapter 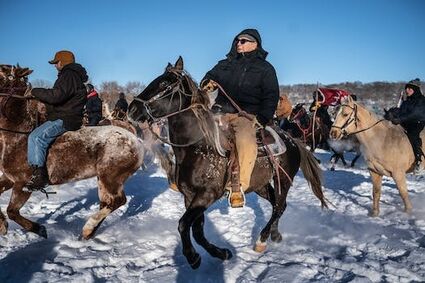 Riders on their last leg of the journey from South Dakota take off from Land of Memories to Reconciliation Park in Mankato.

Prayers and grit kept a team of Dakota riders traveling by horseback through two snowstorms and long, frigid days this month on a journey through South Dakota and southern Minnesota to reach Mankato on Monday - Dec. 26 - to mark the 160th anniversary of the largest mass execution in American history and honor 38 of their ancestors killed on that day in 1862.

Every December since 2005, riders have traveled 330 miles on horseback from Lower Brule, S.D.. The journey retraces the route of their ancestors who were forced out of Minnesota and onto a reservation in South Dakota, following the executions in Mankato and a deadly winter in a concentration camp at Fort Snelling.

In Mankato on Monday morning, hundreds of people cheered the riders' arrival, and listened as the names of the executed were read - the 38 killed Dec. 26, 1862, and two others later captured and hanged - together known as the Dakota 38+2.