Vikings adjust last-ranked defense with NFL playoffs on their minds 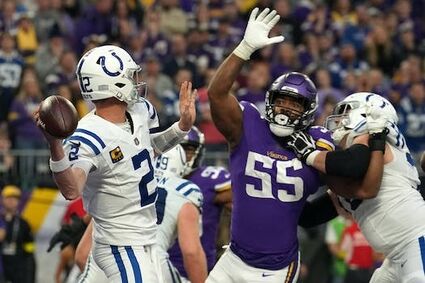 Za'Darius Smith (55) and the Vikings turned up the pressure on Colts quarterback Matt Ryan in the second half last Saturday.

With three weeks before the Vikings' first playoff game at U.S. Bank Stadium in five years, coach Kevin O'Connell said his team is still "on the hunt" for improvement as well as playoff seeding. Getting better quickly is a particular focus for the NFL's last-ranked defense, which still resides in Minnesota even after the Vikings held the Colts offense to a stingy 4.3 yards per play (tying their season best).

Veteran cornerback Patrick Peterson, who has waited seven seasons since his last playoff game with Arizona, knows the Vikings have a rare opportunity ahead. He doesn't want that spoiled because of some growing pains in first-year coordinator Ed Donatell's system.